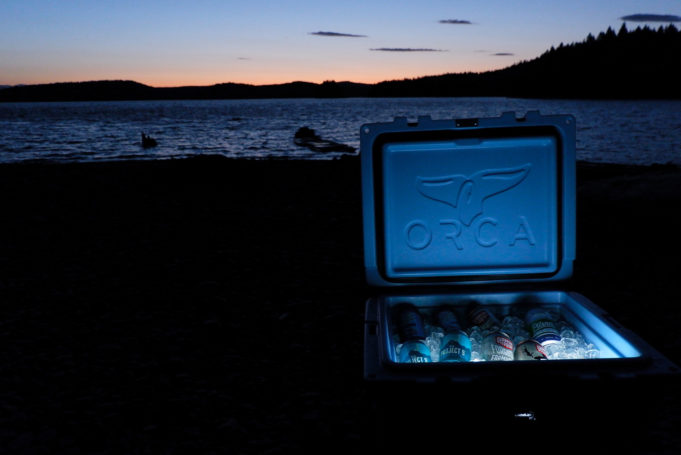 Orca is one of many manufacturers producing rotomolded coolers. This particular style of high end coolers is known primarily for incredible durability and multi-day ice retention. Yeti is the most well-known manufacturer in this space. Although they didn’t invent this style of cooler, they were the first to popularize it. And as their popularity grew, many alternative manufacturers took a similar design and put their own spin on it. In some cases the products were made to be better, other times they were made to be cheaper. This isn’t our first time taking a look at an Ocra cooler. They were featured in our roundup of the best coolers on the market. But Orca was kind enough to send us one of their new 35 quart coolers with Liddup technology, so we decided to take it out into the bush and test it for ourselves.

Orca makes a high end rotomolded cooler. Essentially, this is a foam-core cooler that has been coated evenly with a highly durable plastic. Rotomolding, or rotational molding, is a process that gives the plastic a very even coating with minimal imperfections. In total, you’ve got a side wall that is around 2″ thick, providing an advertised ice pretension of “up to 10 days.”

Orca’s coolers are available in sizes ranging from 20 quarts up to 140 quarts. There are a few key reasons why you might choose Orca over another brand. For starters, they are made in the USA. While they aren’t the only ones producing locally, many competitors are moving production to china to save costs. But despite being produced locally, the standard Orca coolers aren’t really any more expensive than competitors. So you’re getting a pretty good value in this regard.

Another reason people choose Orca over competing brands is the wide range of designs and colors available. Pretty much every cooler has 7+ color choices, with some offering graphic designs. So you can get a cooler featuring the logo of your favorite sports team, camo, or a bunch of other design choices. There are too many options to list here, so you’ll have to check them out for yourselves.

If you’ve been shopping around for a rotomolded cooler, you probably know that they are all pretty similar. But liddup is something unique to Orca. After using it for a little while, I honestly don’t think i’d be able to go back to using a cooler without this. Liddup is simply an LED lighting system. When you open the lid, lights come on. When you close the lid, the lights turn off automatically to save your batteries. Works just like your fridge. Simple, eh? Certainly one of those “why didn’t I think of that!” products.

Liddup might not be the most useful for a quick day-trip down to the beach, but these coolers are designed for people who plan to be out and about for multiple days, not hours. If your overnight camping trips are anything like ours, you’re certainly going to find yourself digging around in the cooler after dark – struggling to find your favorite beer or the ingredients you need for a late night snack.

With my old cooler, i’d always find myself using one hand to move things around in the slush while the other hand held up my phone for a bit of light. But with liddup, I was in and out pretty quickly, since I could find what I was looking for right away.

The design is pretty smart. Essentially you’ve got a strip of LED lights across the front lip – just below the lid. The lights are fully contained inside of a C shaped channel, so nothing is shining right into your eyes. All the light is directed down into the cooler. There is also a nice plastic covering the diffuses the light a bit, so it’s not too intense. It appears to me that this light is triggered by a magnet or some kind of proximity sensor, so it only turns on once the lid is raised.

Liddup requires four AA batteries, but they include a set to get your started. I’ve spent a total of 6 days out with the cooler, and the batteries are still kicking. But i’ll update this article once I figure out how long they last.

Liddup is pretty new on the market. Currently, only their 35 quart cooler is available with this feature. You do pay a few bucks extra for it, which is well worth it in my mind. That being said, I do hope that they release this feature on the larger coolers. As 35 quarts might not be enough for a large family or a 4+ day trip.

Now that you’ve heard my thoughts on the most unique feature about this cooler, let’s go into more details about how it actually performed. 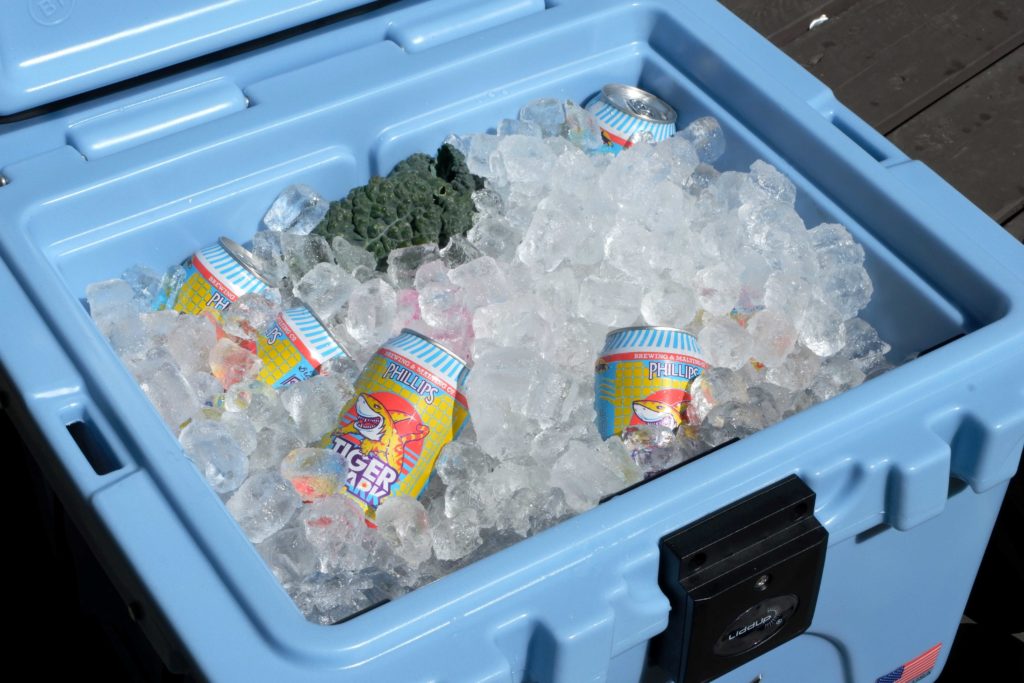 Most manufacturers rate their coolers for “up to 10 days.” In reality, we’ve found this estimate to be a bit of a stretch. I don’t doubt that if you shoved a large block of ice in this cooler and stashed it somewhere out of the sun, it would probably take around 10 days for the last sliver of ice to melt. But this doesn’t really reflect how consumers actually use their coolers.

We decided to do a bit of a “stress test” on our Orca. To get the best results, it’s better to use blocks of ice and properly pack your cooler to get the longest possible ice retention. Additionally, you should keep in the shade and regularly drain the water out of it.

I simply threw a ton of food and three bags of cubed ice into it, and headed out down a logging road for a three day camping trip with a few friends. We left the cooler in the sun for a while, we waited to drain the ice, and we found ourselves repeatedly opening it to grab another drink. Without making any attempt to improve our ice retention, there was still a decent amount of ice left after about 60 hours. It was getting a little low, and i’d certainly have wanted to top it off if I was staying any longer. But this can be considered a good “worst case scenario.” Still better than my 12V cooler, and I didn’t even have to plug it in!

There were a few unique design choices I quite liked on the cooler. While I picked a light blue model, there are seven different colors to choose from. If you’re going for a standard cooler without liddup, you’ve got even more options.

The T handles are shaped like whale tales – a cool little piece of branding. But they’re also very easy to grasp and use. Opening the cooler and closing it is made quite simple, even though you need a tight seal.

Another thing I really liked about the cooler is the drain design. It’s just a threaded in cap, but there is a little hole punched through it so you only have to turn it a little to let all the water out. You don’t get it all over your hands, and you don’t have to completely remove the cap.

Orca also included a handy little fabric pounch on the back, which is durably made and pretty convenient for storing a few odds and ends.

Impressive rigidity and durability is often touted as one of the main advantages of rotomolded coolers, and from what we have seen this is pretty consistent from brand to brand. I’ve seen all kinds of stunts pulled, including driving a big jacked-up truck over one of these coolers.

Personally, I try to take care of my belongings. So I didn’t do anything crazy, but we did have the cooler bouncing around in the back of my buddies truck while we drove for a couple hours up a decommissioned logging road, and there is no real signs of wear on it. Once we wiped the dirt off, it looked as good as new. The handles are made from a thick weave fabric with tubular rubber grips on them, so we don’t see these wearing out anytime soon. The latches are made from stretchy rubber, so they’re not going to snap or break. Overall, my Orca was on par with other high end coolers. 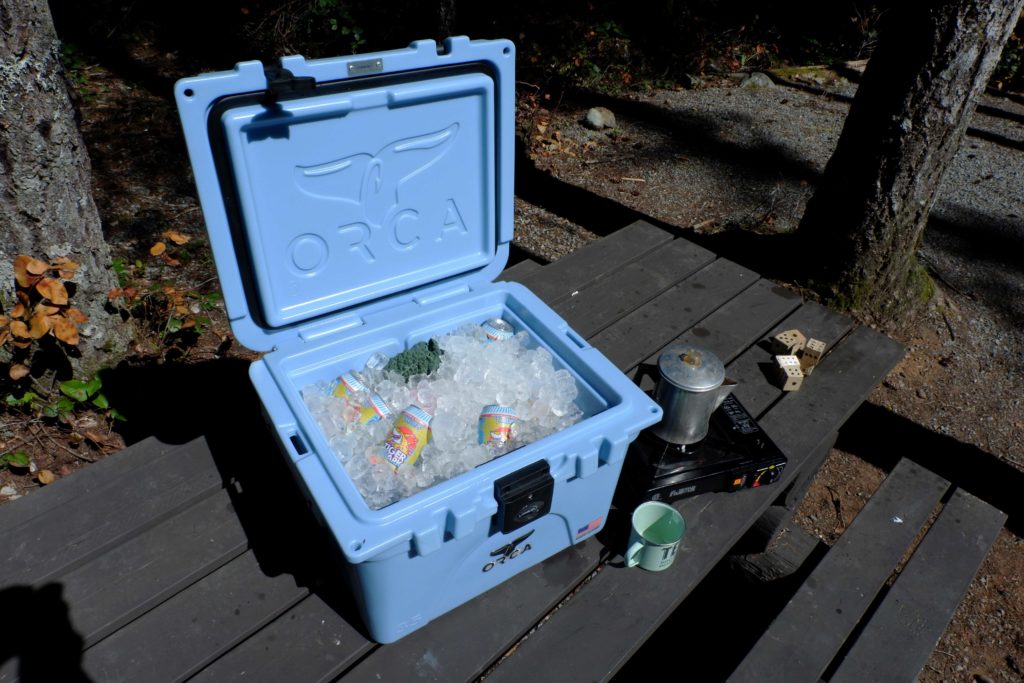 In my opinion, if you’re on the market for a high end cooler the Orca with Liddup technology is your best option. The light is incredibly useful, and the additional cost is pretty negligible in the grand scheme of things. I’d recommend this cooler to anyone who needs their ice to last for multiple days. It’s certainly an investment, but one that will serve you for many years to come. I’d like to see Liddup made to be available in larger sizes, but hopefully this is something that we’ll see in the future.