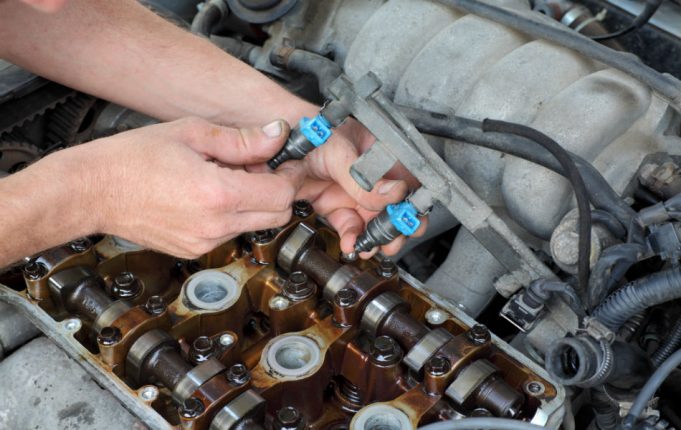 Vehicles regulate your speed and acceleration by varying the ratio of fuel and air heading into the engine. Historically, this was managed by carbeurators. Even today, many motorbikes, generators, and other simple engines rely on carbs to control engine speed. But this is pretty primitive technology, and ever since the 70s fuel injection has allowed vehicles to become more powerful and more fuel efficient. Sure, the technology was around before that. But it wasn’t until this time that it because to establish itself as the superior way to deliver fuel.

We enjoy fuel injection in almost every modern vehicle. But not all fuel injection systems are created equally, and some are vastly superior to others. What type does your car have? What effect does the type of fuel injectors you use have on the performance of your vehicle? Read on to find out. Modern engines are vastly different from the ones we used 30 years ago. Automotive manufacturers put a lot of time and money into developing their engines, and these changes took place slowly over a long period of time. When fuel injection first hit the market, the technology was retrofitted to engines that were designed to use carbeurators. This early technology was called throttle body fuel injection, or TBFI. As technology improved, we moved towards multiport injection. While this technolgy is still in use in some economy cars, the most popular type is Multiport Injection. Finally, an up and coming technology is Multiport Injection. Read on to learn the differences between them, and what this means in terms of performance and maintenance. Also referred to as single port, this was the earliest type of fuel injection to hit the market. All vehicles have an air intake manifold where clean air first enters the engine. TBFI works by adding the correct amount of fuel to the air before it is distributed to the individual cylinders. The advantage of TBFI is that it’s inexpensive and easy to maintain. If you ever have an issue with your injector, you’ve only got one to replace. Additionally, since this injector has a fairly high flow rate, it’s not as easy to clog up.

Technically, throttle body systems are very robust and require less maintenance. That being said, throttle body injection is rarely used today. The vehicles that still use it are old enough that maintenance will be more of an issue than it would with a newer, lower mileage car.

Another disadvantage to TBFI is the fact that it’s inaccurate. If you let off the accelerator, there will still be a lot of fuel in the air mixture that is being sent to your cylinders. This can result in a slight lag before you decelerate, or in some vehicles, it can result in unburned fuel being sent out through the exhaust. This means that TBFI systems are not nearly as fuel efficient as modern systems. Multiport injection simply moved the injectors further down towards the cylinders. Clean air enters the primary manifold and is directed out towards each cylinder. The injector is located at the end of this port, right before it’s sucked through the valve and into your cylinder.

The advantage of this system is that fuel is distributed more accurately, with each cylinder receiving its own spray of fuel. Each injector is smaller and more accurate, offering an improvement in fuel economy. The downside is that all injectors spray at the same time, while the cylinders fire one after the other. This means that you may have leftover fuel in between intake periods, or you may have a cylinder fire before the injector has had a chance to deliver additional fuel.

Multiport systems work great when you are traveling at a consistent speed. But when you are quickly accelerating or removing your foot from the throttle, this design reduces either fuel economy or performance.

Sequential fuel delivery systems are very similar to multiport systems. That being said, there is one key difference. Sequential fuel delivery is times. Instead of all injectors firing at the same time, they deliver fuel one after the other. The timing is matched to your cylinders, allowing the engine to mix the fuel right before the valve opens to suck it in. This design allows for improved fuel economy and performance.

Because fuel only remains in the port for a short amount of time, sequential injectors tend to last longer and remain cleaner than other systems. Because of these advantages, sequential systems are the most common type of fuel injection in vehicles today.

the one small downside to this platform is that it leaves less room for error. The fuel / air mixture is sucked into the cylinder only moments after the injector opens. If it is dirty, clogged, or unresponsive, your engine will be starved of fuel. Injectors need to be kept at their peak performance, or your vehicle will start to run rough.

If you’ve started to notice the pattern, you can probably guess what direct injection is. In this system, fuel is squirted right into the cylinder, bypassing the air intake altogether. Premium automobile manufacturers like Audi and BMW would have you believe that direct injection is the latest and greatest. With regards to the performance of gasoline vehicles, they’re absolutely right! But this technology is far from new. It’s been used in aircraft engines since the second world war, and diesel vehicles are almost all direct injection because the fuel is so much thicker and heavier.

In diesel engines, direct injection is very robust. Fuel delivery can take a lot of abuse, and maintenance issues are kept to a minimum.

With gasoline engines, direct injection is found almost exclusively in performance vehicles. Because these vehicles operate with very precise parameters, it’s especially important to maintain your fuel delivery system. Although the car will continue to run for a long time when neglected, the performance will quickly decline.

When to Use Fuel Injector Cleaner

You should run a bottle of dilute fuel injector cleaner through your engine a few times per year, just to keep carbon deposits from building up. If you have an older vehicle that doesn’t run as well as it used to, a more aggressive solution may be warranted. For more information about the best fuel injector cleaner you can buy, check out our buyers guide.

When to Replace Fuel Injectors

With Throttle Body and Multiport systems, there are a few key signs of a bad injector. Often the vehicle will have a hard time starting, and will burn a lot more fuel. Your car will have much less power than when it was new. Because injectors tend to wear out over time, it can be hard to notice the gradual decline in performance. That being said, your mechanic will be able to detect a fuel deliver issue during a basic inspection.

With sequential and direct injection, the signs are more obvious. You’ll notice a rough idle, and the vehicle may vibrate and rattle more than usual. You may have a hard time getting up to full RPMs, and acceleration may have a more “aggressive” sound to it.

Injectors play a crucial role in the operation of your vehicle, and it’s important to understand how they work in your specific car. Now that you know the four types, it will be easier to take the appropriate steps to ensure they continue to operate for many years to come.