ORCA Coolers vs YETI – Which One is Worth Your Money?

Roto-Molded Coolers are one of the latest trends for outdoor enthusiasts. For most, YETI is the first brand that comes to mind. They’re often considered the best, but they cost a fortune. Orca, on the other hand, is known for being affordable. Though they are new to the industry, they’ve already made a solid dent in the market.

Is it worth it to buy a name brand model, or will this inexpensive alternative perform just as well? Before you spend your hard-earned money, we’ll find out which company will keep your beers the coldest.

YETI and ORCAs are both great coolers. You can get up to almost a week of ice with both coolers, although ORCA takes the slight advantage.

We absolutely love the cargo pouch on the back of the ORCAs that makes it a great pick for camping and the beach as a place to put your phone, lighter or flashlight.

The prices are fairly close, but while ORCAs are still made in the USA, YETI has moved their manufacturing overseas. Plus, ORCAs have a lifetime warranty compared to YETIs 5 year.

as advertised.” Although a newer company, they have quickly made a name for themselves in the industry and has seen new growth. The company donates a portion of all profits to several organizations such as Wounded Warrior programs, Breast Cancer Foundations, Wildlife Conservation Organizations and more. The company pledges that their products will exceed customers expectations, or do whatever it takes to ensure their satisfaction. They aim to increase the USA’s work force by manufacturing their ice chests in the USA, as opposed to outsourcing overseas.

YETI is also an American company, founded in Austin, Texas. The company was founded by two brothers that saw an opportunity to improve on existing cooler design and performance. The company has since grown to be an industry leader, and are used by

folks around the globe, as well as several professional hunters and fishermen such as Flip Pallot. YETI was involved in numerous lawsuits, taking on companies that they claim infringed on their patented design. You definitely don’t want to mess with a Yeti. Although designed in the USA, their ice chests are now manufactured in China.

Maintaining their manufacturing in America has allowed ORCA to maintain a high degree of quality in their ice chests. Unlike RTIC, whose quality leaves something to be desired and have been known to cut some corners, ORCA holds its own compared to the high quality YETI.
The design of ORCA coolers is reminiscent of YETI and other roto-molded ice boxes – thick-walled insulation covered in a seamless plastic coating. The thick walls and lack of seams give these ice chests an extremely long lifespan, making them virtually indestructible. They are extremely similar, with only a few key differences:

The rubber latches of the

ORCAs are designed to look like a whale’s tail, which is a nice design touch and homage to the clever name of the company. The rubber is thick and heavy-duty and won’t wear easily.

One great feature we absolutely love that the YETIs don’t have is the mesh cargo pouch that is mounted to the back of every ORCA cooler model. It’s a great spot to keep your phone, wallet, keys off the ground and still within reach. 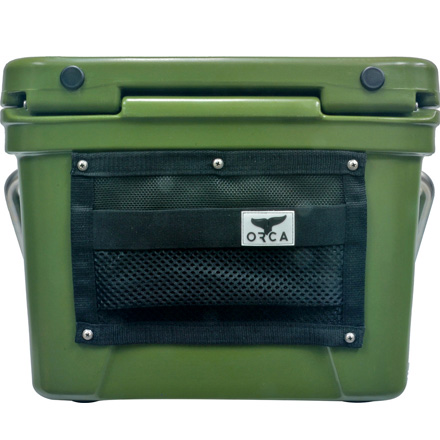 The size of cooler you need will vary depending on how you’ll be using it. If you’re looking for a companion for day trips to the beach, then the YETI 20 or ORCA 20 or 26 may be the best option for you. If you need something for weekend trips and something more versatile, maybe consider a cooler in the 40-70 quart range. If you are looking for an icebox for your boat, you’ll want to look at the larger models, 120+ quarts.

One of the most important features (if not THE most important) of your new cooler will be how long it actually keeps your ice. There are tons of YouTube videos and reviews online of folks performing their own ice retention tests and comparisons between brands, so we did all the research and compiled the results for you (Skip to the 2:30 mark in the video below to see the results after 4 days).

It’s also important to note that there are a ton of different factors that can affect your cooler’s ice retention including (but not limited to): the size of ice you are using, what you’re storing inside, temperature outside, where you store it, how often you open the lid, did you pre-cool it, and more.

So how do these two brands compare? Despite YETIs being considered the cream of the crop of roto-molded coolers, in general we found that ORCA coolers actually provided better ice retention. Comparing the two brands side by side in as equal conditions as possible, ORCAs were able to retain ice on average, around 1 day longer than YETIs. Again, every person’s use of their ice chest will differ, and with that the ice retention, but that’s just what we’ve found. 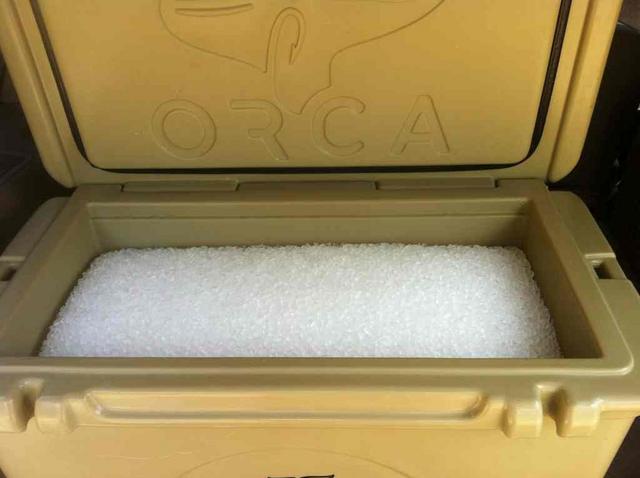 A Quick Note on “Pre-Cooling”

It’s recommended for roto-molded ice chests that you use a “sacrificial” bag of ice before you actually need to use it. The thick insulation not only keeps your icebox cold, but it works both ways and can absorb ambient heat of where it’s being stored, keeping your ice chest warm, or even hot. Whenever possible, pre-cooling with a bag of ice and allowing it to melt and drain it before using (or storing it in a cold place) will improve the performance of your cooler when you need it. 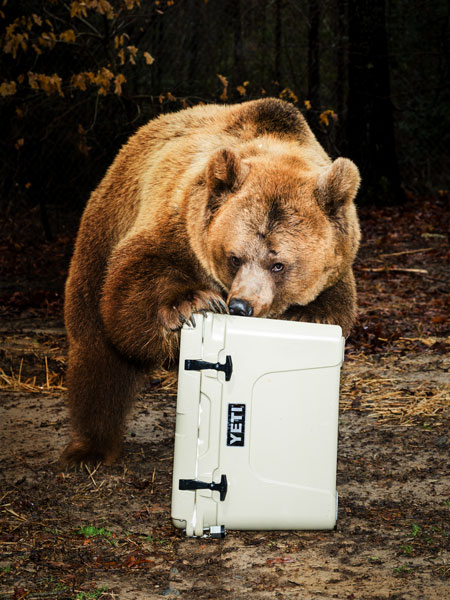 YETI has no problem boasting that they have IGBC bear-proof rating for their coolers. The small hole in the corner of the lid and tub allows a space for a padlock to lock the lid down tight, preventing bears to get into your things, since the rubber latches are a breeze for them to get through. Having bear-proof products is great for those who spend time out in the woods fishing, hunting or camping.

But, the only thing that makes it bear-proof is having a padlock. Otherwise, it’s like any other cooler…

As such, despite not having the official IGBC rating, ORCA coolers can also be considered bear-proof since they have the ability to be locked with a padlock, keeping bears and other wildlife – or other humans – out of your stuff, even if they don’t have the certificate.

YETI actually provides a decent warranty. They provide a 30-day satisfaction guaranteed return window, in addition to a 60-day exchange policy, if you decide you need a bigger size or want a different colour. After that, their products are backed by a 5-year limited warranty that is valid for any manufacturer’s or workmanship defects that may arise over that time.

ORCA by contrast beats out those measly 5 years and backs their ice chests by a lifetime warranty against manufacturers defects in their materials or in workmanship. This is assuming the ice chests have been under normal use and ORCA will then replace or or repair your defective product. As long as you have proof that you’ve obtained the cooler from a registered dealer or online retailer like Amazon you should have no issues applying for the warranty coverage. There is some fine print involved with exemptions, but we’ve found ORCAs customer service is great and as long as you have a true warranty issue it shouldn’t be an issue.

If you’re looking into a roto-molded icebox, you should know by now it’s not going to be the same price as a cheapo Wal Mart brand. YETIs are notorious for their high prices which is a huge turn off for some folks. Yes, they have a great reputation, but a good chunk of what you’re paying for is that reputation, and the marketing. ORCAs are often cheaper, and with very comparable quality and ice retention. Plus, you get a lifetime warranty and a product made in the USA.

Check out the full line of YETIs coolers here

The Bottom Line – ORCA vs YETI

At the end of the day, the differences between these roto-molded iceboxes are pretty minimal. Any brand you choose will do a great job at retaining ice and keeping your beer or food nice and cold, although it may differ by a day or so. They all have similar features and the differences in quality is mostly negligible. We can’t make the decision for you, but let’s review what we learned in this article, and which brand wins in each category.

Companies & Reputation
Advantage: ORCA
Both are American companies with great reputations, but ORCAs are still made in the USA, while YETIs are now manufactured in China.

Design & Materials
Advantage: ORCA
The features you’d expect in a cooler are all there: thick insulation, durable plastic, and everything else. But, we love the mesh cargo pouch fastened to the back of the ORCAs, and the rubber latches that look like whale tails are just the cherry on top.

Sizes & Colours
Advantage: YETI
Despite the smaller sizes of ORCAs having more colours available (black, pink, tan, white, blue and green) the YETIs have so many more sizes to choose from.

Price
Advantage: ORCA
YETIs prices are becoming and the price compared to ORCAs are fairly comparable now. But, now that YETIs are made in China, for the quality and performance you get from the American-made ORCA, you can’t go wrong. 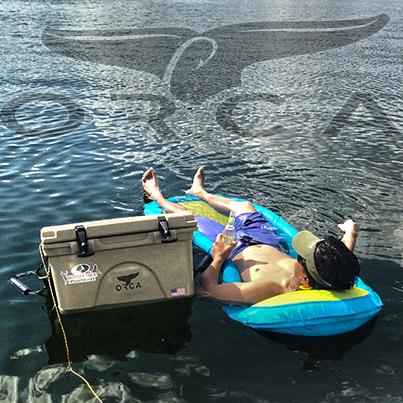 So, there you have it. In the categories that we compared, ORCA coolers come out on top. This doesn’t mean that YETIs aren’t great products, because they obviously are. But you can maybe save yourself a few dollars going with a slightly lesser known brand.

In This Article:
Disclaimer