Whether you’re out camping for the weekend or moving into an off-grid cabin, you’re going to want a way to keep your food cold. You could always switch to a raw food diet, but I like my burgers. And when you’re trying to keep meat, room temperature just ‘aint going to cut it.

There are tons of fantastic roto-molded coolers on the market. You can also outfit your vehicle with a 12V fridge. But if you’re on a tight budget, these options are just a little out of reach. I decided to go the DIY route, and build a so-called “10 day cooler” myself. The entire project cost less than $100, making this the most economical way to keep your food cool. I’m going to show you how I did it step by step, so you can do the same. 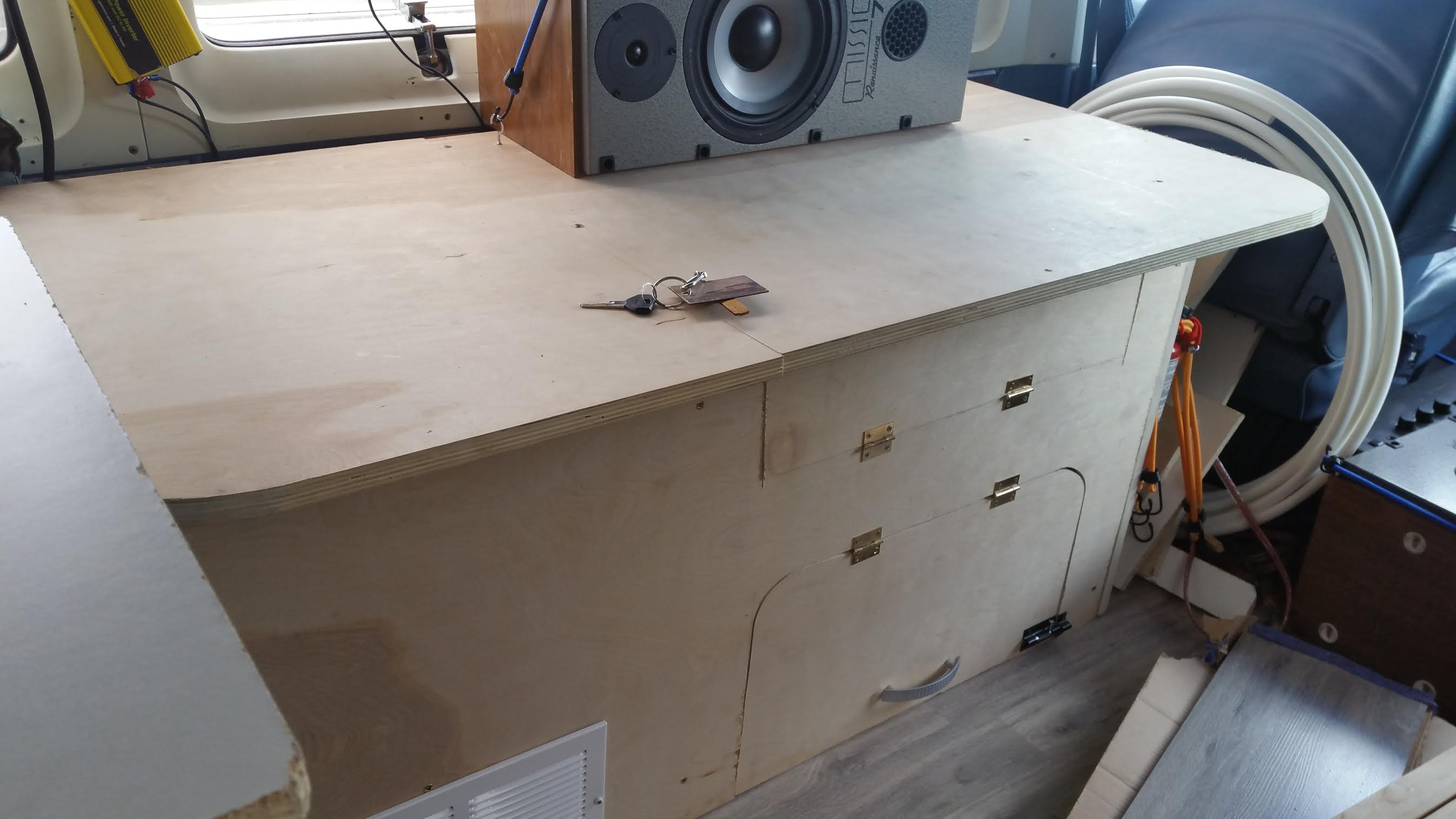 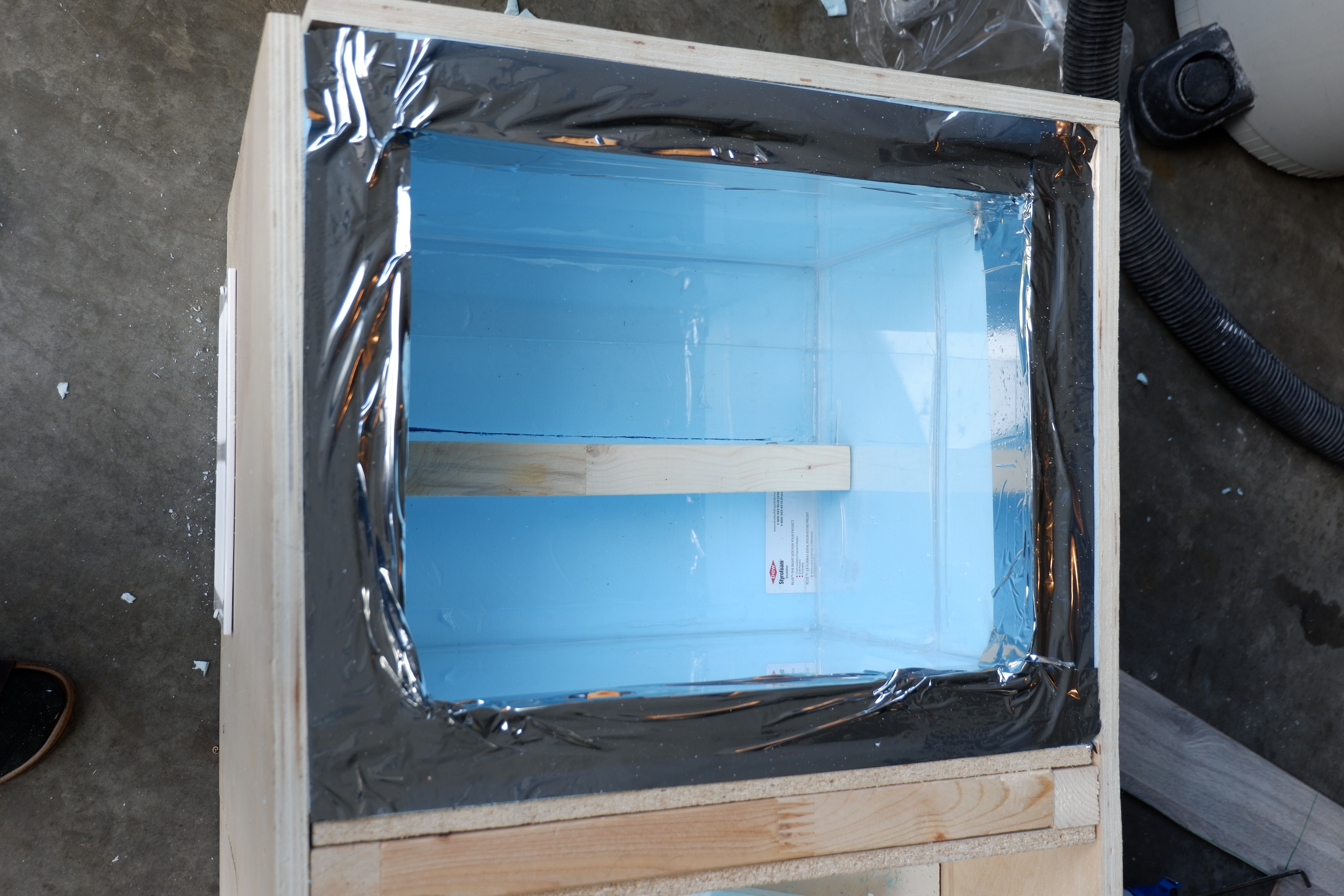 I’m living fulltime in a camper van, so I needed a little more from my cooler. The enclosure doubled as a kitchen, but these direction can be adapted to suit any size or shape you like. My main objectives were:

The materials list for this project is pretty simple. You can get everything at your local hardware store, or you can order it online. If you do order online, you’ll be a little more restricted in terms of size and shape. For larger boxes, it might be easier to get this stuff at a hardware store. The main issue is material size. Shipping a full size sheet of plywood just isn’t cost effective. But if you built your box out of smaller (2′ by 2′) materials, Amazon will flat-pack everything and deliver it to your door.

Here is what I used:

The Theory Behind the Insulation

We’ve reviewed a ton of 10 day coolers, so we’ve got a pretty good understanding of what sets certain models apart. The most important is insulation. Inexpensive coolers perform poorly because they don’t have much insulation. Not only do we need our insulation to be thicker, but we need to choose the most effective insulation possible. 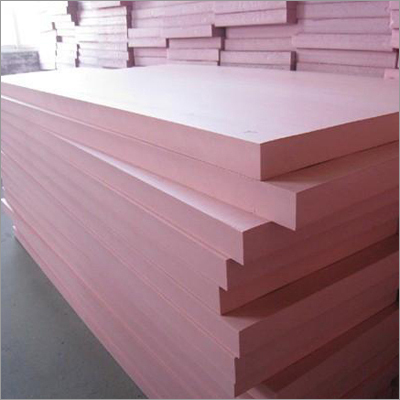 Currently, the best insulation that money can buy is Expanded Polystyrene Foam. This is also sold as Styrofoam, but it’s not just any Styrofoam. The standard stuff has those little chunks in it, where as expanded foam is evenly distributed, and has tiny little air pockets inside. The expanded styrofoam we’re using, also referred to as XPS, is significantly better. This video does a pretty good job of explaining the differences between the two.

How efficient of an insulator a certain material is can be measured by the R-value. The higher the R-Value, the less heat your cooler will absorb.

This type of foam has an r value of 5 per inch. The best coolers on the market have an R value of  9, so i’ll be using two inches to keep my cooler competitive. Even though my R value will be higher, I don’t expect my project to perform as well as professionally made models. High end rotomolded coolers are carefully crafted so they don’t have any leaks or poorly insulated areas. For a DIY job this is unavoidable, so I’m planning this system to be overbuilt for my application. The end result should provide the insulation I need. 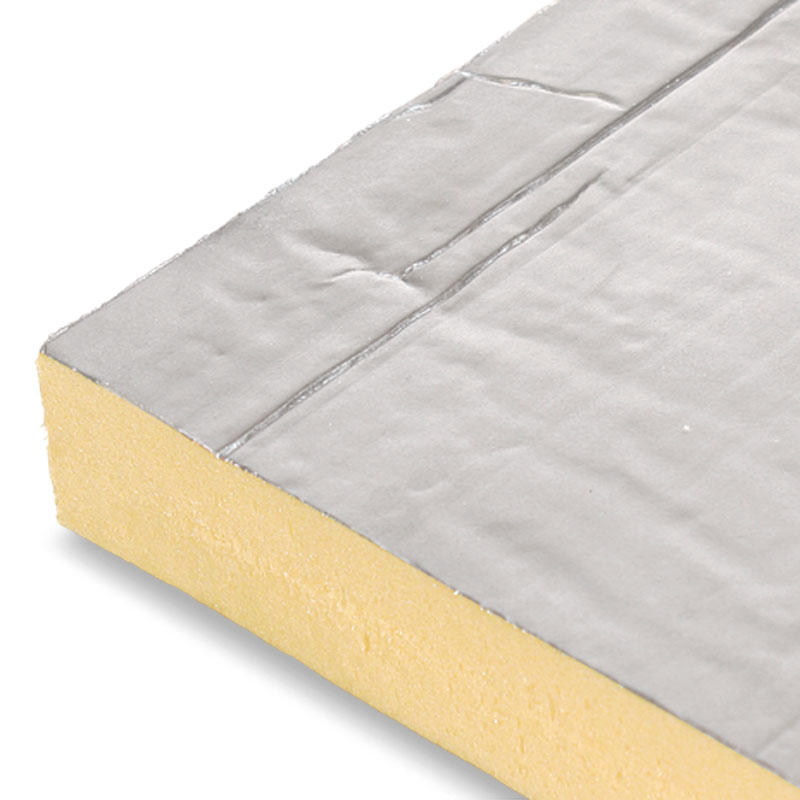 You might be tempted to use composite insulation. You’ll find this in the hardware store next to the foam. It’s obvious from it’s shiny silver faces and crumbly yellow foam center. On paper, this insulation has an R-value of 9. However, this is not suitable for a cooler. I debated using this insulation, but it turns out that it’s R-Value is temperature dependent. In warm temperatures you’d expect in your home, it’s very effective. But as you approach freezing temperatures, it’s R-Value drops from 9 to 3. For this application, the styrofoam is a much better insulator.

On a budget, you could use spray foam insulation, or cut the insulation down to one inch. This would reduce the effectiveness of your cooler to only keep ice for 2 to 3 days, but that may be enough for some people.

Yes, the plywood and the plexiglass do provide some insulation, but this is really negligible in the grand scheme of things. For now, we’re just going to be factoring in the R-value of the foam. 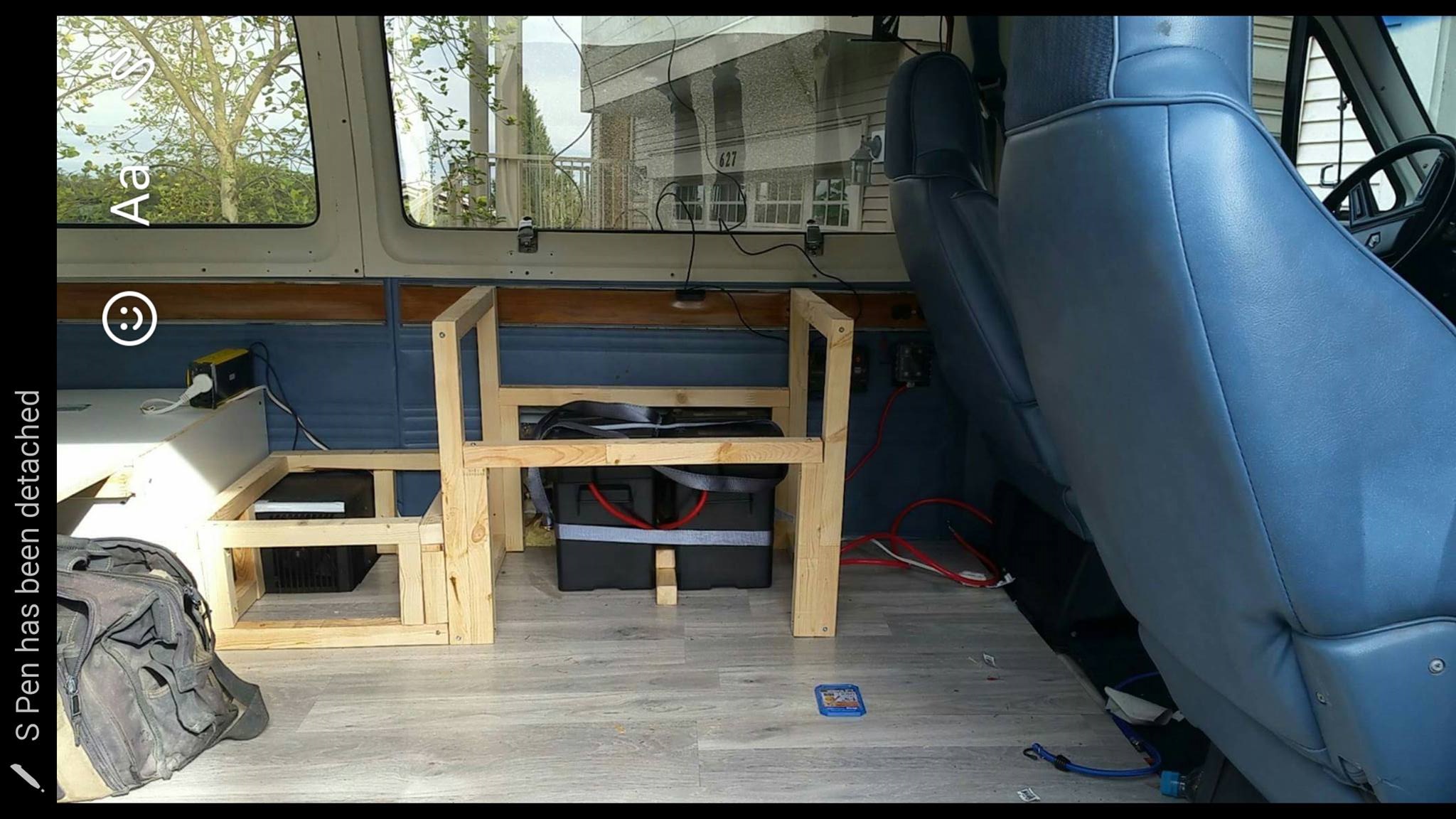 You’re going to need an enclosure for the cooler. In my case, I wanted an entire kitchen, and somewhere to store my solar batteries. Mine might be a little more complicated than yours, but there are plenty of ways you can do this. For something portable, a simple box will work. If you want to add in cup holders or a storage drawer, go nuts. This is your cooler, and the frame is where you rough out your idea.

Honestly, my wood working skills aren’tall that great, and I was trying to keep weight down. But you want an example of what can be done, check out DIY Pete’s cooler.

Step 2: Frame in the Walls 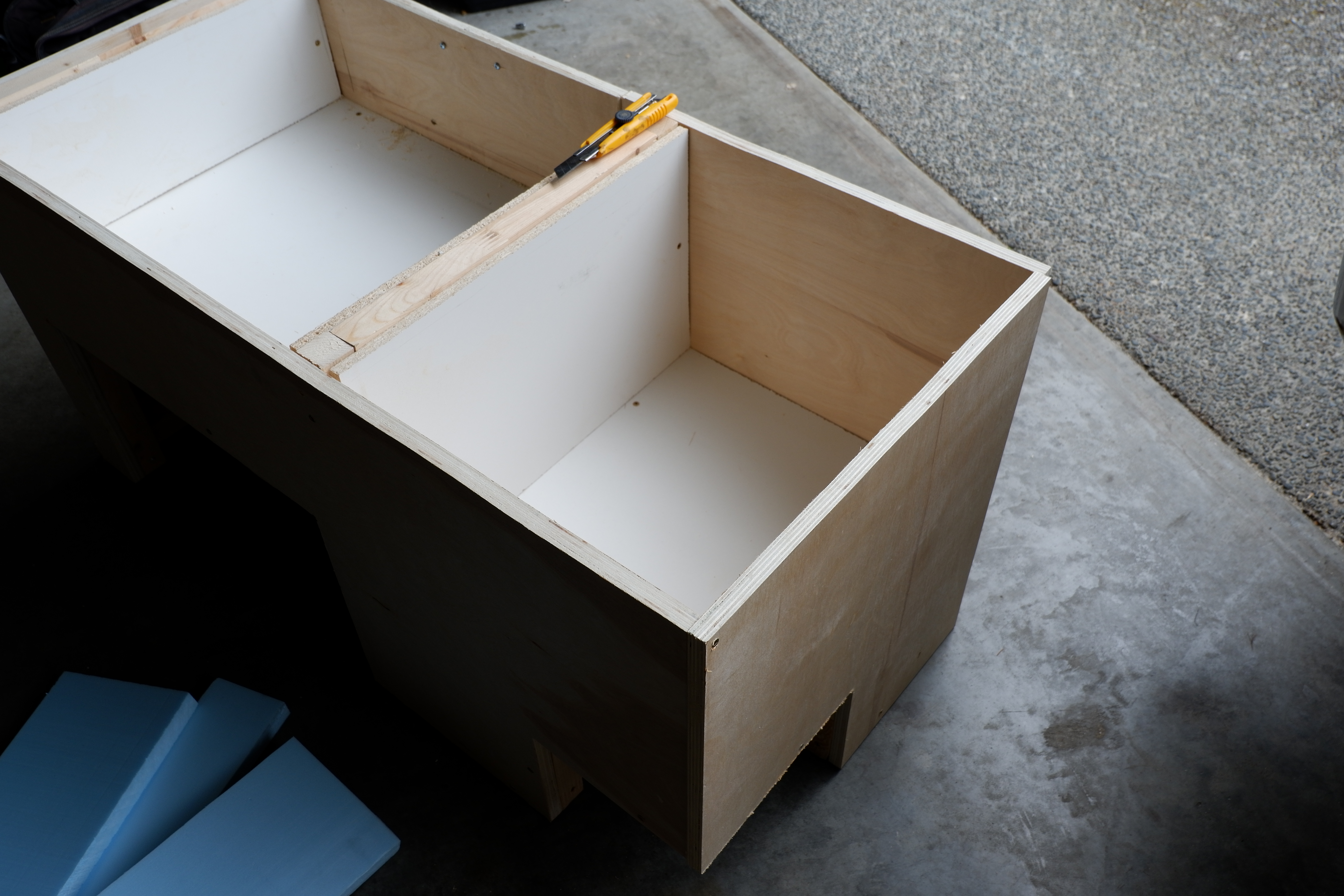 In my case, my framing was a little flimsy. If this is the case for you, you don’t have to be too concerned. The plywood provides much of the structural integrity, so once you get this screwed into place your cooler will be a lot stronger.

This part of the process isn’t quite a simple as it appears. However, there are a few tricks I had to learn the hard way that can make your life a lot easier. 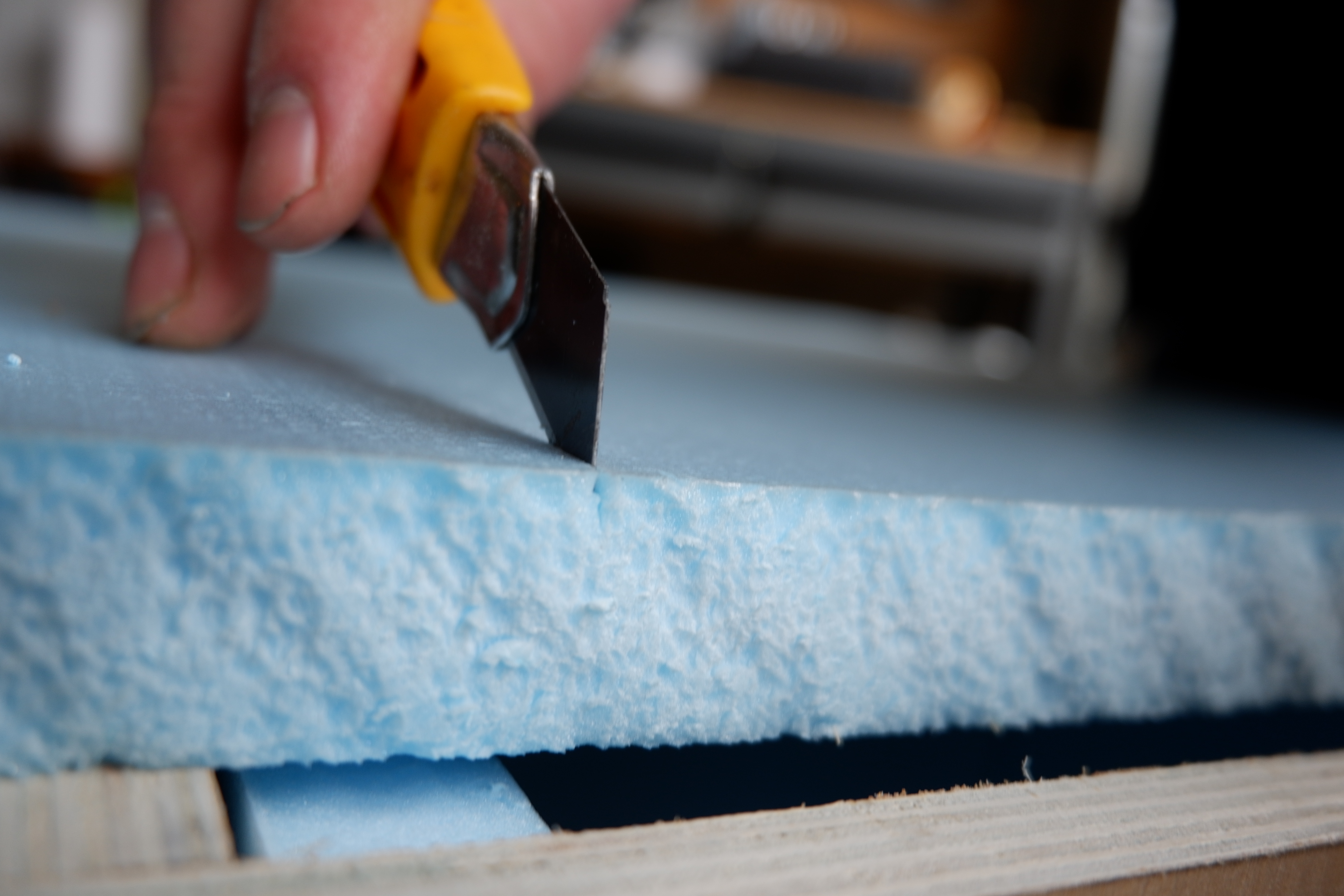 The basic process is to take a knife, run the blade along the foam, then snap it off with your hand. 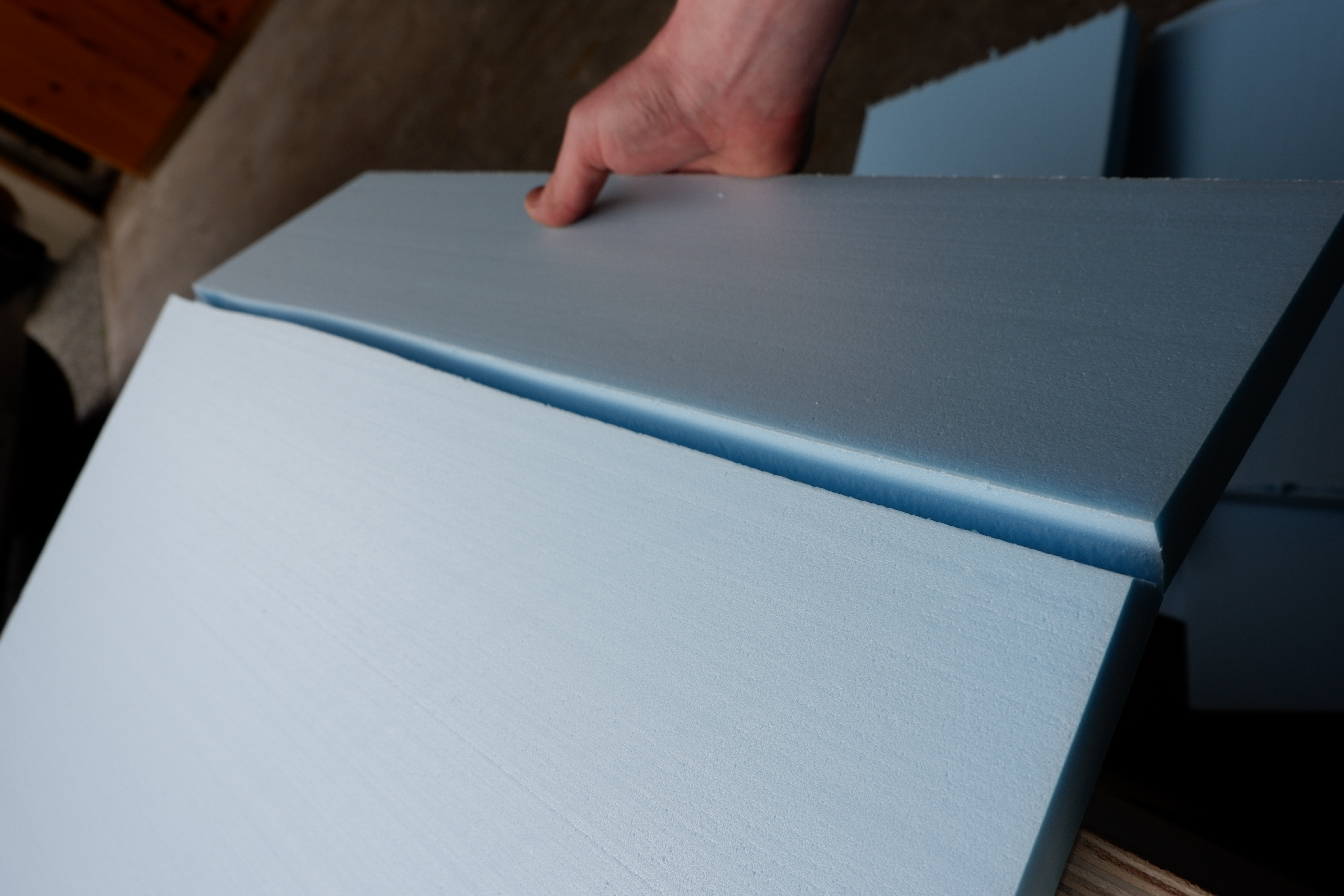 It’s important to cut with the grain of the foam. When you cut against the grain, you get all kinds of burrs pulling up and the knife doesn’t seem to want to make a straight line. 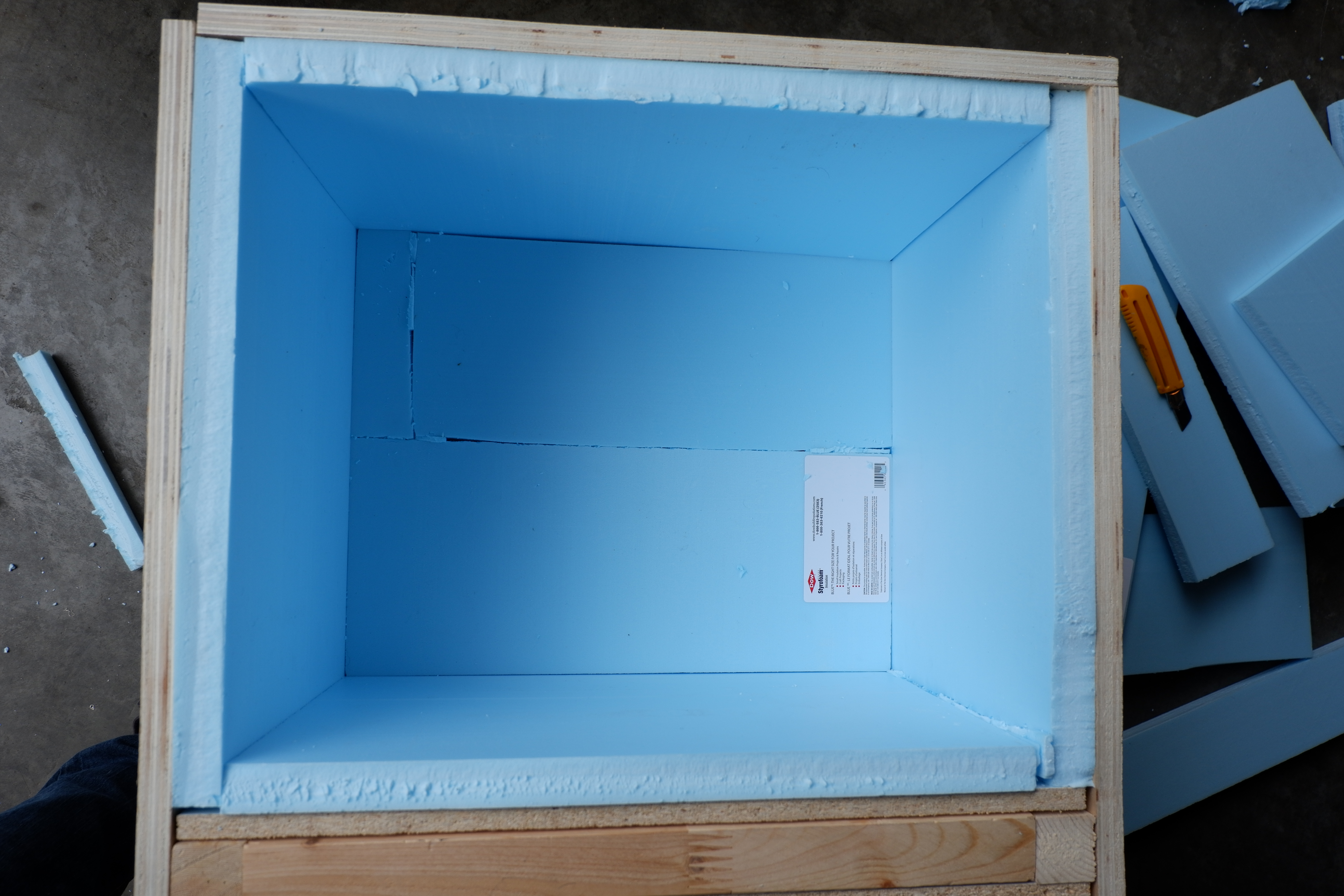 Take your cut pieces of insulation and layer then two deep against all the walls. To hold everything in place, I walled the sides first, then added the bottom. After I completed the first layer, i added in a second. 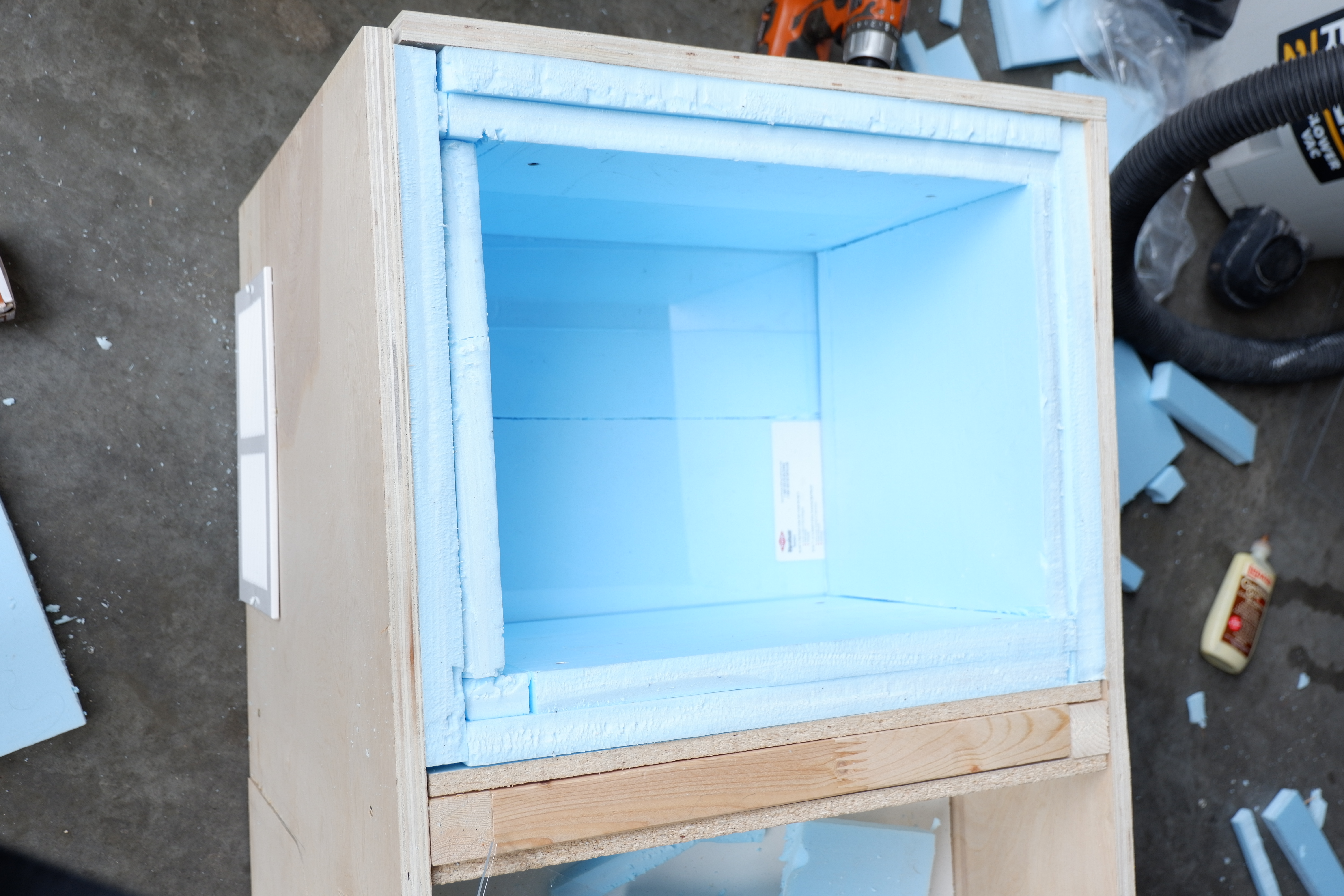 By doing this step by step, the bottom layer will always hold the sides tight against the walls. Once this was done, I added in a few wood screws for good measure.

Plexiglass is a little tricky to cut, and I had to learn a lot of this the hard way. Basically, you need to take a straight edge and score the edge of the plexiglass. You’ll get little strips of plexiglass curling up past your blade, and this is what you want. I had to score it about five or six times before I could get a clean brake, but these photos should show you everything you need to know.

If you’re still unsure, check out our article on how to cut plexiglass for more information. 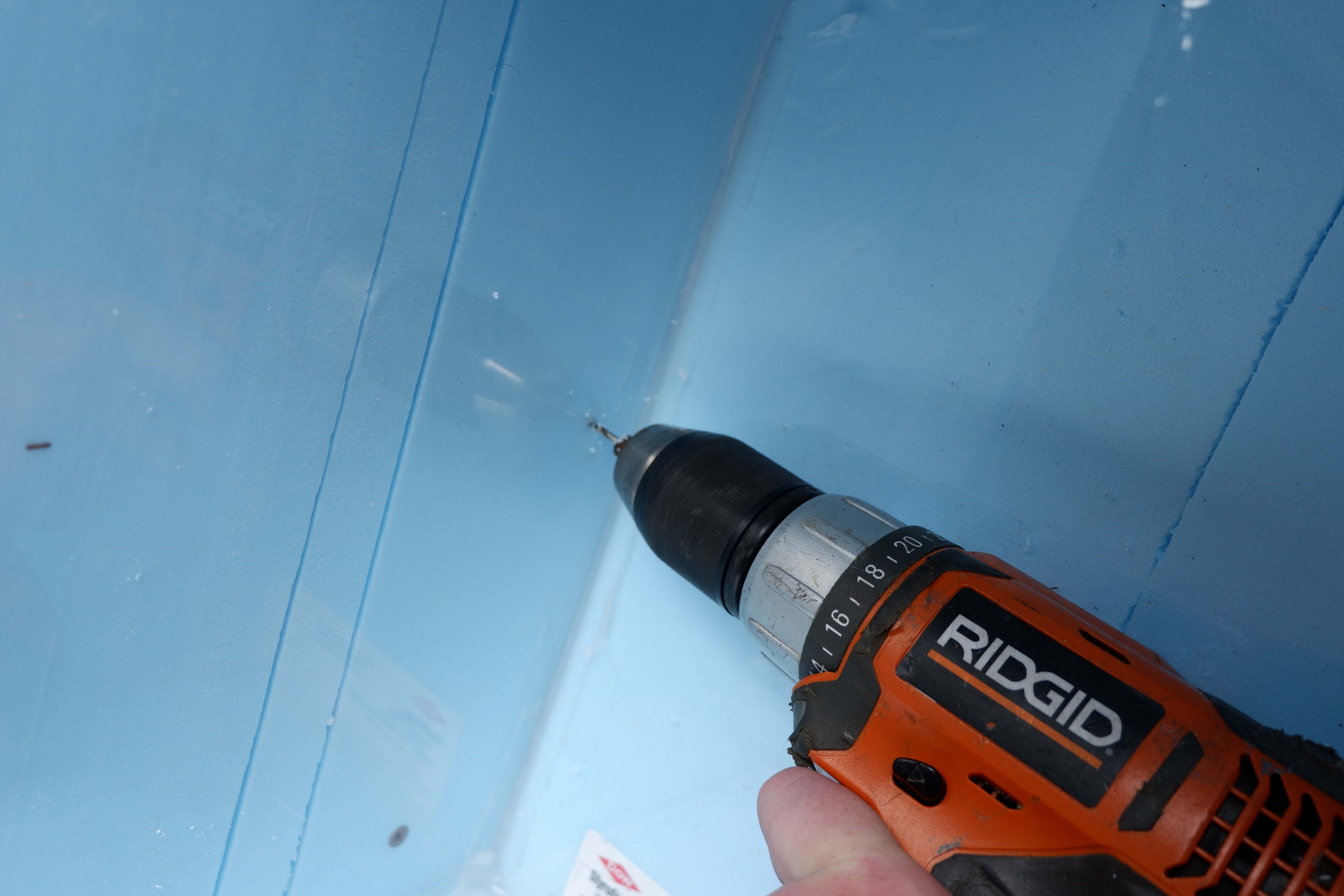 One of the most important things with any cooler is having the ability for water to drain out. Ice that is floating in water will drain much faster, so it’s important that you drain it all out as quickly as possible. In my case, I needed the water to drain out the side so that I could plumb it out the side of the van. But it may be a lot easier just to plumb it right out the bottom. I used some leftover water piping and compression fittings to join everything together.

This stuff is cheap to buy if you don’t have it. If you’re going to drill through the Plexiglass, you do need to make sure that you start with a small pilot bit, then work your way up. My cooler is currently stuffed with food, but i’ll get some pics of the completed drain shortly. 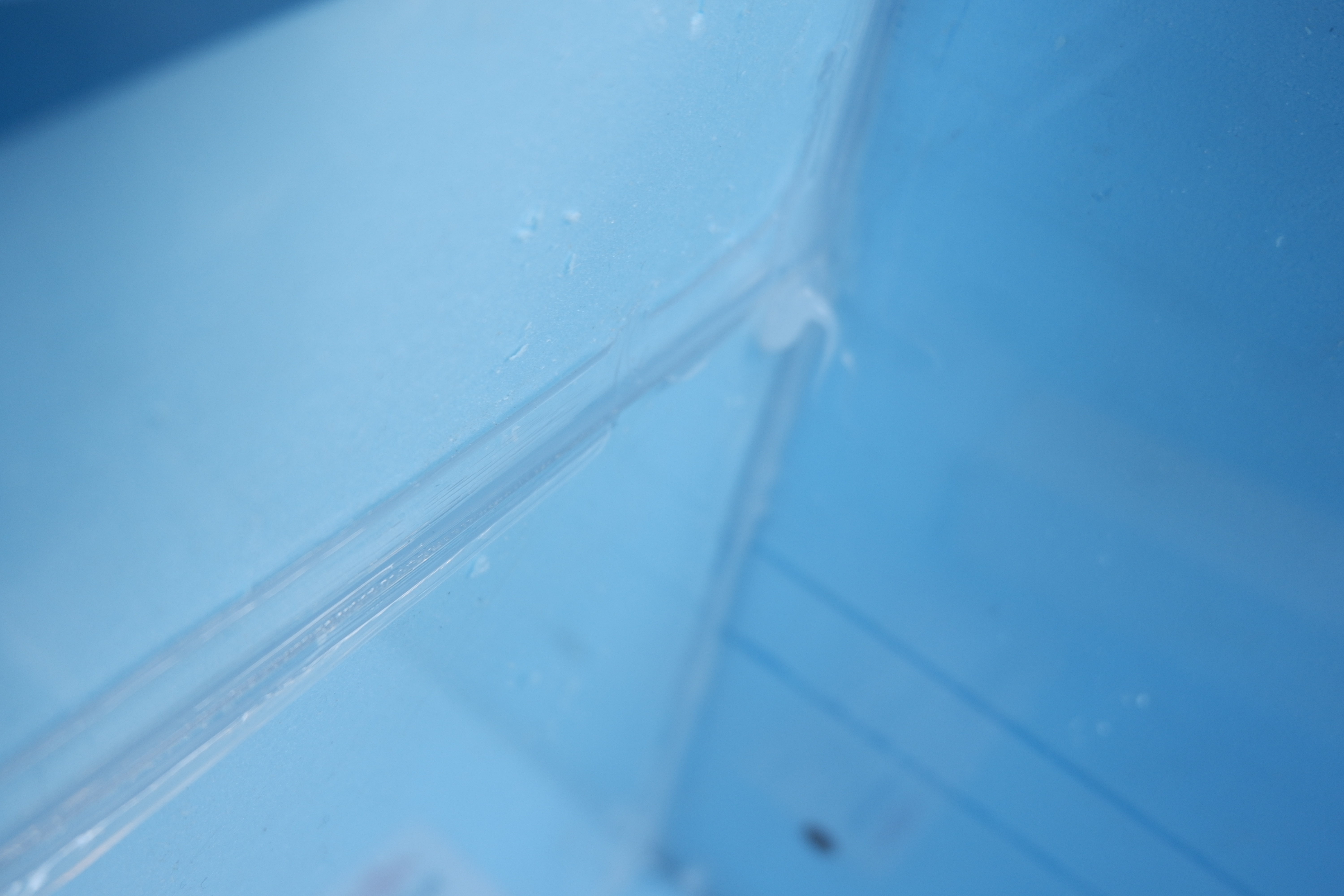 The last thing you want is for the water to leak everywhere, so you’re going to have to seal it. I installed caulking around all the joints in the plexiglass, but others have just sprayed silicone over the whole thing.

How Does it Work? 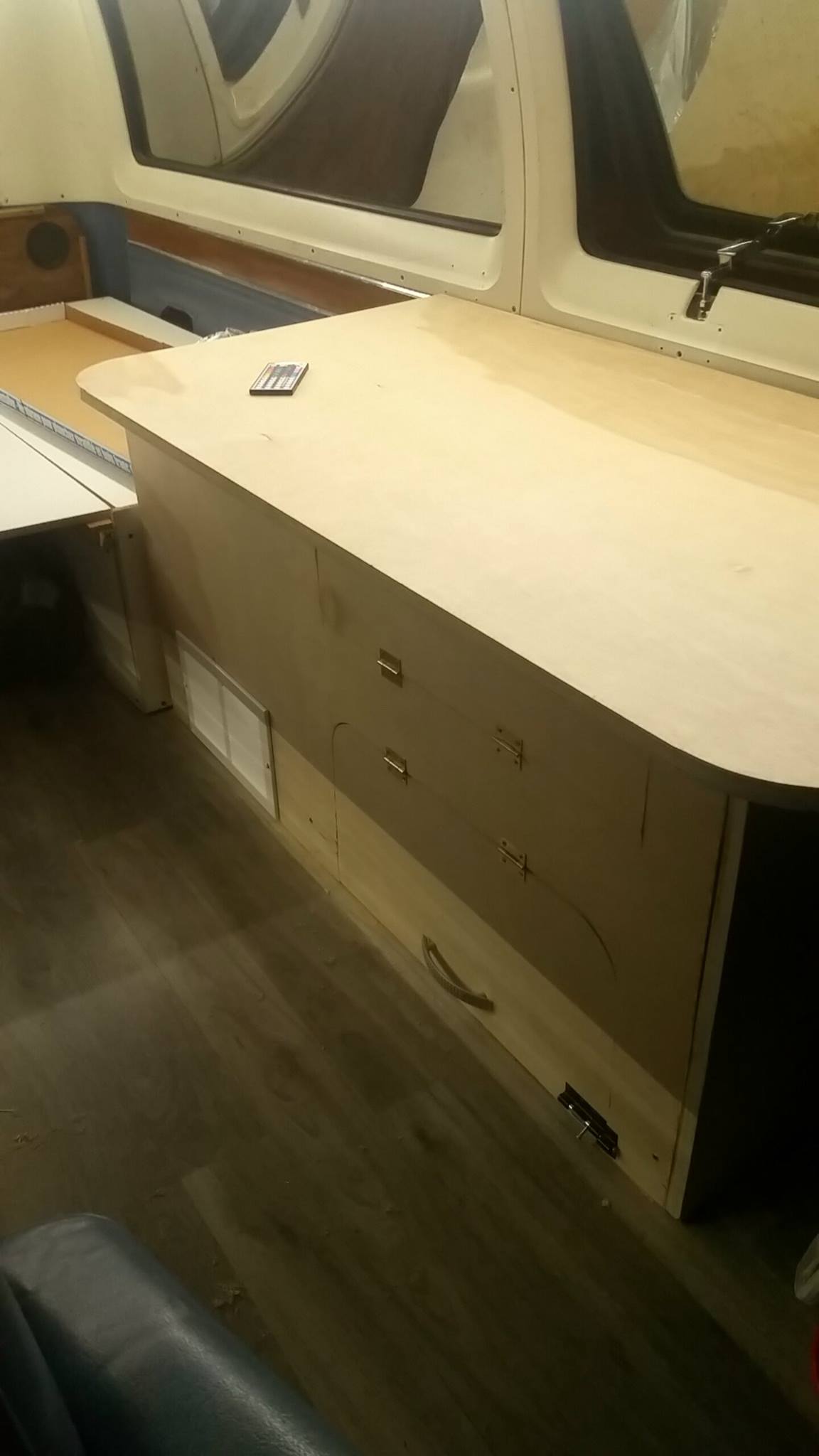 I’ve been using this cooler for about 2 weeks now, and so far i’m pretty impressed with the results. If I fill it to the top with ice, it will be about half full in four days. I’m pretty confident that I could make it a week and still have some ice left in the cooler. However, i’m actually eating out of this thing every day. So I think that’s a little unrealistic.

Sure, technically a 10 day cooler will have some ice left in it after 10 days. But the reality is that I can’t do anything with some ice. I need enough to cover all my food. In my eyes, anyone who built a similar system would be good as long as they bought ice every 5 days.

Issues with My Design

With this project, I was really winging it. I’m pretty happy with the results, but there are a few things I wish I had done differently.

First, I wish I had measured my cuts a little better. When I first finished the cooler, my top didn’t sit completely flush. Since this is also a cooking surface, that was a major pain. To fix this, I just used a wood file to make everything level. 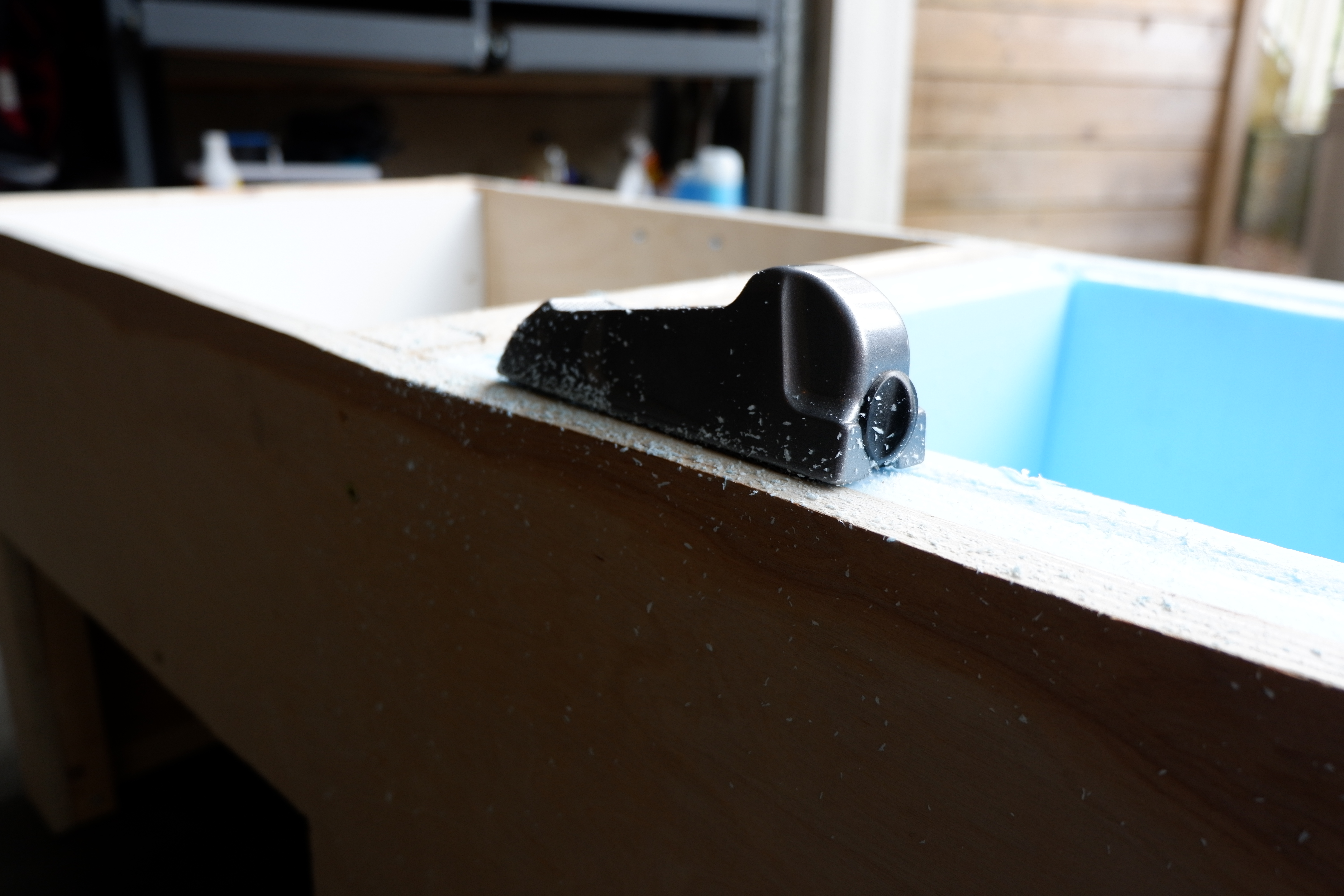 The second issue is the drain. I don’t have any space below the cooler to plumb a drain, and my external vent is to the right of it. At the time, I thought the easiest thing would be to go through the side. However, this means that there is always a little layer of water on the bottom that is too low to flow through the drain. So far, my only solution is to mop it up with a rag when I change the ice. But i’ll update this once I’ve found a better solution. For now, i’d recommend that you drain straight out the bottom.