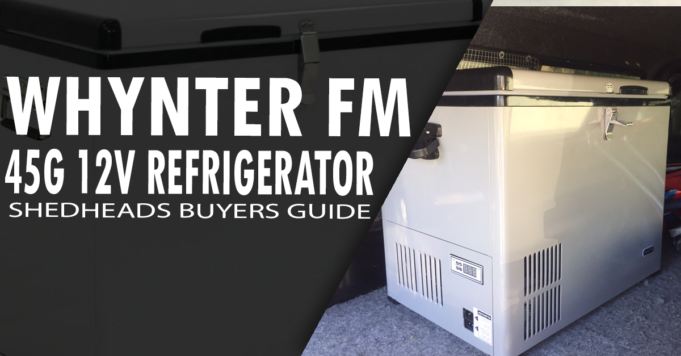 If you’re looking for refrigeration on a budget the Whynter FM-45G is a solid, if not exactly “impressive”, low-end option. Some design flaws keep it from being truly top of the line but that doesn’t mean this cooler doesn’t have it’s highlights, and in its price range it’s hard to beat.

If you’re in the market for a new powered cooler for your cabin or RV you might want to give this one a look – Let’s go over the details below: Energy consumption is an interesting question with the Whynter FM-45G; in normal operating conditions we found the cooler using 65.5 watts, which is very much on the high end for its size – The same was true for it’s “Fast Freeze” mode, designed for rapid cooling. However, if in a cool enough environment (90°F or below recommended) the unit’s power-saving “Low” mode takes energy usage down to just 35.5 watts, which is a significant decrease even over other, similar 12 volt powered cooler units.

Temperature control is another high mark for the Whynter, as our tests showed variances between 1.5°F – 1.7°F between recorded temperature and what the unit was registering, which is excellent compared to its competition. The unit is listed as reaching temperatures as low as -8°F and we found it coming relatively to that mark, usually hitting about -5.7°F to -6°F – Still pretty darn good. If you absolutely need those last two degrees you might be disappointed, but considering the budget appeal of this model it’s a little hard to gripe.

Not the only 12V Refrigerator on the Market

While it’s one of the affordable ones (and did make our list of the top recommended options) there are several over 12V refrigerators available. Check out our 12V refrigerator guide to learn more about how this model competes to other popular options. Portability, however, is where we start to run into issues. At nearly 55 lbs this is a very hefty box for its size, and the handles are far too small – Ill suited for the task of lugging it’s boxy shape around and likely to cause a few scraped knuckles in the process. The edges are also ridiculously sharp and pointy and any aesthetic value-add aside they’re downright unpleasant to run into; the unit may look nice but stumbling into this thing after a beer or two is bound to leave a mark.

Inside the FM-45G is rated for 45 quarts, though we found the storage size to be a little closer to 40 quarts (or about enough for 10 six-packs) – This is a little smaller than other portable coolers on the market but the quick cooling time and deep temperatures help offset this. The interior is also separated via two wire baskets – These are removable if you need more storage space, or can be used to lift the unit’s contents out for quick access. make sure you grab a custom cover which you can check the price for below.

One positive note is the cooler’s construction, which is well-insulated and feels quite durable (hence, we suppose, the weight) – The lid and hinges both have a sturdy feel with a solid latch on the front, and the rubber feet on the bottom help keep the unit in place. Also of note is the attached AC cord, which is well over nine feet long – Though you don’t want to be moving it around after it’s settled in the option of at least readjusting a bit without having to worry about finding a new outlet is greatly appreciated. Cleaning is also fairly easy thanks to the simple interior design and removable baskets, and the unit’s built-in drain plug helps keep liquid from building up within.

And though we laude on the AC cord the DC cord is another matter – The materials and construction on ours felt flimsy and didn’t exactly fill us with confidence, particularly considering the various environments (snow, boats, etc.) this cooler might be used in. Though we are sure the cord shipped with the unit is perfectly safe if you end up having the same concerns we do an after-market DC cord might help alleviate them a bit.

For monitoring the Whynter does well with an LCD control panel showing temperature, voltage, battery and the like; nothing impressive but meets a good standard. Unfortunately this panel is bafflingly on the rear of the unit, making it difficult to see and access once the cooler is in place. Also baffling is the lack of internal light – Even more so when considering that almost all other coolers in its style & size bracket come with this feature included. This may save a bit on power usage but we’d still rather be able to see what we’re pulling out of the freezer.

We were also a bit displeased with how loud the compressor unit can get – Noise is just a fact of life with these sorts of coolers but this one seemed particularly loud compared with others we’ve tested. If you’re a light sleeper it might be worth seeing how much this could affect you before committing to a purchase. Despite any other ups and downs where the Whynter FM-45G truly shines is in price, at almost one of the cheapest retail prices in the market – Competing models such as the Engel Platinum MT35 can run upwards of $1000 USD, where the Whynter comes in at an average of just over $430. To say that this is a value would be an understatement, and though there are some corners that have been cut (or, given the unit’s exterior design, some corners that will cut you) it’s hard to argue against a product that’s over 50% cheaper than some similar models.

Overall the Whynter FM-45G is a solid, heavy, useful piece of equipment, and one we feel is best used in a stable environment where it won’t need to be moved very often, such as a large boat or a cabin. It may not be the best on the market but little inconveniences such as the oddly-placed control panel and the frankly terrible handles get outweighed by overall energy efficiency and a nicely low price tag. Any oddities aside, if you need a powered cooler and you’re watching your bottom line it’s hard to go wrong with this pick. Just make sure you put it down where you want it the first time.