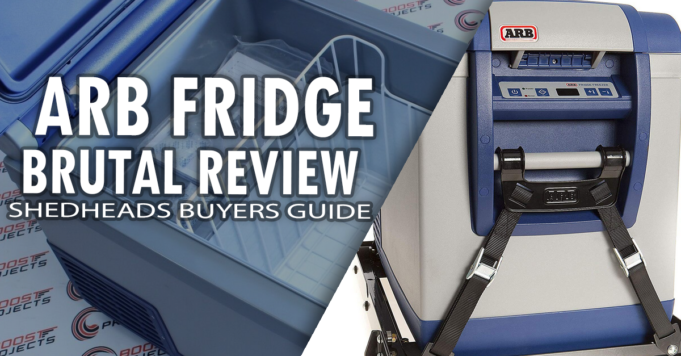 When reviewing products it can be difficult to keep a neutral standpoint – Maybe you’re getting to test out something from one of your favorite brands and you’re fighting the urge to love it before you’ve even laid eyes on it. Or maybe you’ve already read a bad review about a product elsewhere and are worried about tainting your opinion before you get started testing.

Editors Note: These opinions are my own, based on my independant review. They shouldn’t be taken as statement of fact. If you’ve had a different experience, we’d love to hear about it.

When I got the ARB 50 in for review I wanted to love it. I really did. I typically like ARB’s styling and they have a reputation for hardiness, so I figured that with the price this model usually goes for it had to be, if not a winner, then at least pretty darn good.

I was wrong. I was very wrong. And you can read a detailed report on my wrongness below.

Looking for a Different 12 Volt Refrigerator?

We compared this model against many others, some of which we found to perform much better. Check out our roundup of the best 12 volt refrigerators that money can buy to learn more. Before I dig in too hard let me be blunt: This review will not contain a lot of positives. When one of the best pros I could come up with for the unit was “has an easy to read & understand instruction manual”? That’s not a great day as a product reviewer on the internet.

Let’s start with power consumption. The ARB sucks down power like a mosquito latched onto an artery, and in our tests we found this model guzzling down a massive 64 watts – This is higher than the Whynter FM-45G’s average watt usage and unlike the Whynter the ARB doesn’t come with an eco-friendly mode; this is as good as you’re gonna get. When your (again, admittedly nice) instruction booklet straight warns you that many vehicles won’t be able to handle the power needs of your travel fridge, that’s a good sign you might should consider staying far, far away. We’re usually all about efficiency here and that’s an arena where the ARB definitely doesn’t deliver (and don’t worry, it won’t be the last).

Temperature wise the ARB also fails, with the unit rated to reach exactly 0°F but never quite getting there – Most tests showed the lowest temperature we could hit was just around 1.5°F. And we do mean the lowest: More often the ARB showed a temperature variance of up to a whopping +/-6°F. This is a huge, huge differential and not one that should be ignored when thinking about the unit’s efficiency.

Even more disappointing were our insulation tests, which went so poorly we looked up other reviews just to see if we might have had a faulty model (spoiler alert: we did not). The ARB failed with flying colors, gaining up from 35°F to 50°F in just over one hour – This was so terrible I was afraid the unit’s lid might have been ajar but further tests revealed roughly the same results, which matched with other incident reports our staff found out in the wild.

The ARB brags about the short amount of time it takes to reach its minimum temperature but between said temp being a good 8°F higher than its competition and its insulation seemingly crafted from a thin layer of crumpled tin foil we’re wondering if they were just reaching for bullet points to put on the side of the box.

PS: Live in a cold area? Then this freezer is a big old “nope” for you by default. The ARB 50 is only rated to be used in temperatures above 70°F, meaning one mildly chilly spring night and your freezer might just go kaput. How on earth a freezer can’t stand temperatures below 70°F I will never grasp, but it’s just one more piece to the giant jigsaw puzzle of “what were they thinking” that is the ARB 50. When you buy something that’s labeled as “portable” you generally imagine doing things such as “porting it around”. Silly you! The makers of the ARB 50 have decided to evolve away from such antiquated notions and only want you to “port” their 12v freezer to pretty much one location. See, the helpful, well-written instruction manual instructs you, the user, to use the permanent mounting hardware that comes with the unit to permanently mount it somewhere, such as in your vehicle or cabin. Not as a suggestion but as an absolute directive.

What this comes down to is that wherever you want this purportedly-portable fridge to be? That is exactly where it will be staying. The unit can be removed from its mounting, of course, but otherwise you are expected to keep it firmly latched down while in use, and if you are rolling your eyes at this you are experiencing the correct response. Most portable 12 volt freezers of this type cannot/should not be used on an incline or be banged around in any way but the ARB 50 seems very staunch about this point (we didn’t want to break the freezer by testing this too hard), which makes us worry about its overall durability. Good luck keeping your RV completely flat.

The interior is spacious enough and actually manages to fit it’s 50 quart capacity fairly well; expect to get a good 12 or so six packs of cans inside without the basket. Not that you’ll probably want to use the basket after you’ve managed to wrestle it out of the unit for the first time because the thought of putting it back in and ever taking it out again is nightmarish – The asymmetrical fit makes it unwieldy, and the deep interior design means pulling the rack (and any other contents) out in tight spaces is a complete non-starter. Same with the divider set into the opening – It fits but very loosely, and has a habit of slipping out of place when you least want it to.

The lid opens lengthwise, which is a terrible design choice for an item meant to be used in cramped quarters – We believe this might be the manufacturer’s way of enticing customers to purchase a sliding rails kit to go along with their new freezer, but as that would involve actually buying this unit in the first place we also believe that to be wishful thinking on ARB’s part. The lid can be completely detached with some effort by tugging it forward and tweaking it side to side but this action feels flimsy and unsafe, as though the frame is more likely to break before the lid’s hinges let go. From a construction standpoint the ARB 50 is made of fairly tough plastic, with a rounded shape to its edges that makes it easy handle overall, but the ruggedness of the main material seems defeated by odd latches and some very dicey hinges; though we didn’t experience any breaks in our own tests this doesn’t seem uncommon based on other feedback found online, which no one here who’d interacted with this refrigerator found difficult to believe. Everything on the ARB 50 feels, for lack of a better term, weak, and when the large, friendly instruction manual tells you that the surface is not rated to be used as a seat? It feels flimsy enough that you believe it.

Feature-wise the ARB 50 hits most of what we consider the basics for it not to be absolutely primitive – An interior light, a drain hole, a console with some buttons and an LCD temperature gauge. Standard stuff, though the console itself has a bit too much “give” to the buttons that makes it feel fairly cheaply made. It’s also worth noting that when the latch for the lid is down it renders the console pretty inaccessible; nothing major but yet another poorly implemented design decision.

Also note the weight of the freezer: Just shy of 50 lbs, and with a very strange, asymmetrical weight inside. Lifting the unit up is incredibly awkward, but it doesn’t really matter that much because you’ve already mounted it to the one location you’re going to be keeping it, right? Right. I guess that’s why the included cords are all so short – After getting used to a bit of freedom of movement with units like the Whynter FM-45G there’s a lot about this model that feels incredibly constricting.

And now the kicker. This freezer – This poorly constructed, ill-insulated, portability-not-recommended portable freezer costs just a few hundred less than top tier brands. If this is the part where you laughed out loud we completely understand, as more than one person on our staff literally burst out with a shocked “hah!” after hearing the sticker price. For ten dollars less you can get the much, much better Dometic CFX 50w, or for half the price you can pick up the only slightly smaller Whynter FM-45G. Or you could literally buy anything that isn’t this freezer, because spending that much on this machine would be an incredibly poor expenditure of time, money, and your mental health.

If there was one truly good, unique aspect to this freezer it’s in the included warranty – Three complete years of coverage, which is far and away one of the best warranties available to a travel freezer/fridge of this size & weight class. Unfortunately this warranty will not cover the damages accrued when you throw it into the nearest deep ravine out of pure frustration and disappointment. If you skipped all of the above and just came down here to read the wrap up it’s pretty simple: This freezer is bad. There is almost literally nothing to recommend it over it’s competition and, in that, we will not be doing so. There are plenty of other portable powered freezer/refrigerator units on the market (several of which we’ve handily reviewed right here on our site!) and you are better off with almost any other model you can find – Even the Costway 54 (which as our review points out has had notorious issues with cracking and overall poor construction) is a better alternative to this, if for no other reason than you won’t have spent twice as much money on something even more cheap and terrible.

Really awesome instruction book, though. Shame it couldn’t come with a better freezer.